DWAG Demands Justice in Darfur and Across Sudan

On the 12th anniversary of the first arrest warrant issued by the International Criminal Court (ICC) for Omar al-Bashir, the disgraced former Sudanese president, Darfur Women Action Group (DWAG) submitted a letter to the Prime Minister Abdallah Hamdok of the Transitional Government of Sudan demanding the unconditional transfer of al-Bashir and the Sudanese officials Ahmed Haroun and Abdulrahim Hussein to the Hague to face trial, among other demands.

The letter was also addressed to members of the Sovereign Council, the Justice Minster and the Chief Justice. Along with Niemat Ahmadi, President and Founder of DWAG, 55 individuals from various national and international human rights groups, legal associations, student organizations, universities and other organizations concerned about the human rights situation in Darfur and Sudan in general signed on to the letter. They include four signatories from groups in Sudan, three from other African countries, 36 from North America, nine from Europe and three from Australia, reflecting the global concern for the lack of enforcement of the pending  ICC arrest and the ongoing  human rights abuses in Sudan.

The demands to PM Hamdok and the Transitional Government of Sudan include:

DWAG’s letter draws special focus to the gruesome extent of the crimes committed by al-Bashir and his government: genocide, war crimes and crimes against humanity. The letter also brings renewed attention to historical grievances, devastation and trauma resulting from years of torture, pillaging and systematic rape commited during his regime, and the rights of  the 4 million Darfuris displaced by violence in the region.

The consequences of the Sudanese government’s refusal to surrender al-Bashir and his complicit allies to face trial in the Hague are devastating particularly for the survivors of the Darfur Genocide and for the future of Sudan as a country in general. Failing to assure full cooperation with the ICC will demonstrate the lack of commitment to protect the victims of the three decades of dictatorial and bloody rule under al-Bashir and give a free pass to other perpetrators that they can commit gross human rights violations without impunity.

Moreover, the letter highlights the recent attacks against peaceful demonstrations and protests across the Darfur region which have killed and wounded hundreds of people in the past year alone. DWAG and the signatories reiterated their extreme concern about these attacks which mirror a pattern of systematic atrocities committed at the peak of the Darfur Genocide. Assurances from Hamdok’s government that the protesters’ demands for justice and improved security are legitimate are all but empty promises, given that no corresponding concrete actions have been taken with that regard. Given the weak capacity of the Sudanese legal system to ensure witness protection and the delivery of fair and impartial justice, the most viable action would be to cooperate with the ICC to the fullest extent and ensure the prosecution of the perpetrators. Failure to do so would mean that all the demands from the survivors of one of the worst genocides of the 21st century and their allies would fall on deaf ears.

Twelve years of impunity is far too long. We call on PM Hamdok and the Transitional Government of Sudan to do the right thing and act on their assurances

We call on all our supporters in Sudan and around the world to join us in holding the Transitional Government accountable and for real justice to prevail in Darfur and Sudan.

Do not let Al-Bashir get away with murder. 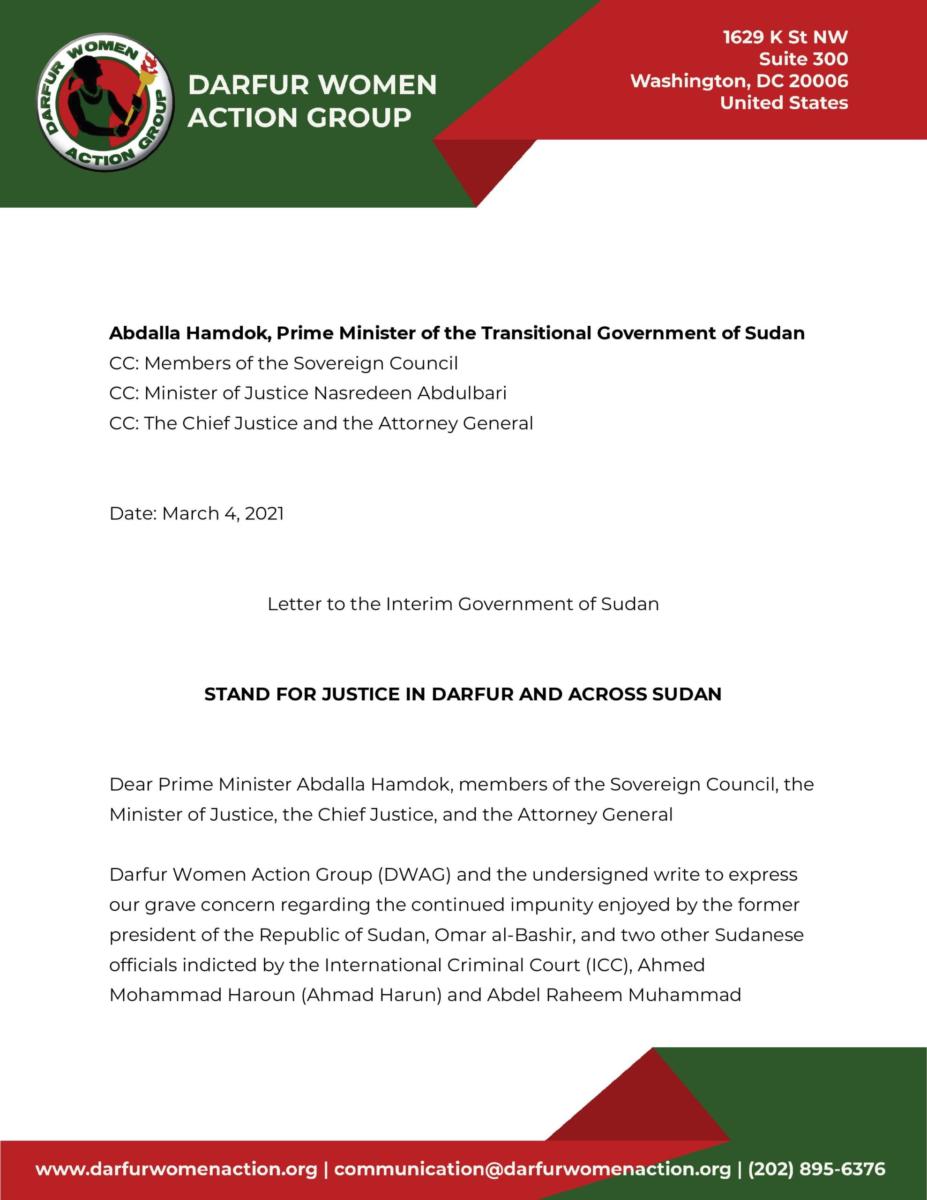